We’d had enough of Goat Park and were antsy to leave. Helen, our guide, asked I take a picture of her on my iPad. I had no idea why. At the corner of the park where we were supposed to meet, a man fresh-squeezed and sold bottled orange juice. Next to him, a girl toasted acorns in a wok for about two minutes. Helen said they were acorns but I wonder if they weren’t chestnuts. This spot she chose for her photograph. 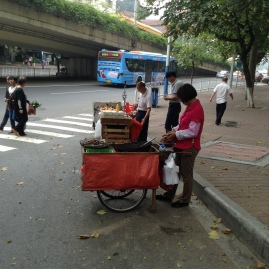 Then she asked me to email her the photo. I wasn’t set up for e-mail I explained. “Never mind,” she said face pinched and chin dropping. Why hadn’t she given me her cell to take the picture, and why take one at all? 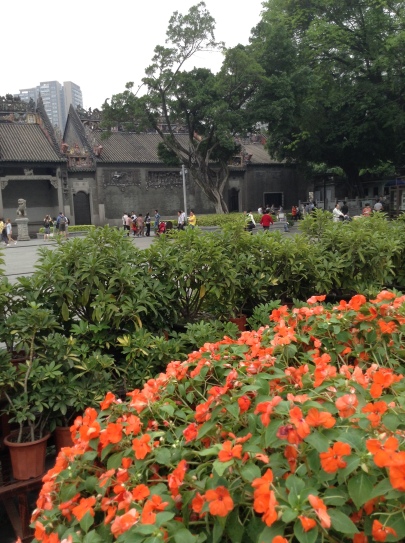 Next on our agenda was the Chen Clan Ancestral Hall.

Helen and the bus driver talked and talked and talked. Somehow it sounded like a family argument. Mr. Li, some 20+ years younger than Helen, chewed his lip more than once and kept his peace. He appeared ticked off over whatever Helen sounded angry about.

Carolyn and Jim moved from the front seat to the back of our full-sized bus because Helen and the driver were so loud. Lorena asked me if I thought it okay to tell them to keep it down. I had no idea, but I said I’d be hesitant as this was their country and we were the foreigners.

At the temple, we toured mostly the outside. This is a tourist trap. The same magnets, jade, embroidery, paintings, doohickeys, and doo-dads were plentiful and on display. One of our ladies bought something expensive and it appeared the tour guide was given a gift. Maybe yes or maybe no.

A young woman, twenty-five or more (maybe less) insinuated herself into our group. She kept bumping into a number of us and me several times. The others in our group succeeded in ignoring her, but she made me uncomfortable because I don’t like anyone so close in my space. After she followed us into a couple of stores, I whispered in Lorena’s ear if she thought the girl a pick-pocket and like magic, the girl vanished.

The room we ate in had room for only four round tables. Ours had eight chairs and I assume each of the other tables did as well. We shared the room with the French group and always knew when they had arrived. Their guide always called out, Un. Deux. Trois. He pointed to the tables as if his people were children. Soon, the noise became deafening in the box of a room and I couldn’t wait for lunch to end.

On the bus again, the discussion at the front went on and on. Helen reached across the aisle for her purse at something beeping inside, took a quick glance at us, her passengers, and continued her loud and angry-sounding conversation with the driver.

Next time on November 17th: Guangzhou and on to Zhongshan

I am currently on an unplanned sabbatical. I hope to return but when is the question. Thank you for your faithful reading. I DO appreciate your kind and continued support far beyond my capability to express. Please bear with me.