The ship rocked and rolled in the night, waking me twice. Were the bored waves playing heave-ho responsible for my roiling stomach for a second night? You know: dark all around, nothing in sight for miles, everyone asleep. Ship looking for excitement? Shakes up passengers? 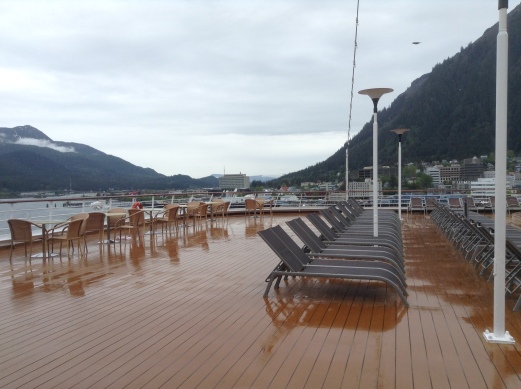 I looked out the window when banging overhead sounded but there was no thunder or flashes of lightning in the sky. In the morning, the deck outside our wet drizzled window was the deck. Great. Tossed and turned in the early morning while the world snored wondering if I should kick in $55.00 for 100 minutes of internet. I decided it would be worth it as I wanted to contact home. The signup online was easy but accessing my account proved futile. I wasted all but 15 minutes of the hundred by the time I called the desk for help. When I logged onto my iPad, a message saying I was on too many devices flashed on the screen. What?

I wasn’t about to buy more minutes but asked they give me back at least half. I ended up with the balance of 15 minutes left plus 40 returned. No more time to play around. It was time for breakfast and then docking in Juneau.

After breakfast, we followed the crowds to the disembarking area. Excitement and chatter filled the stairway up to that particular deck. People took off jackets as all the heavy breathing heated the small space. We waited so long, questions regarding the location of the bathrooms circulated. 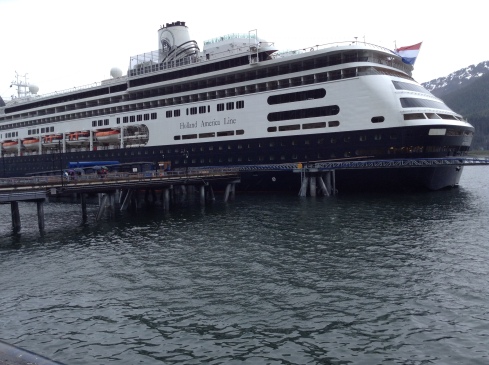 Our impatience finally bore fruit and double doors opened to allow x-ray of bags and/or knapsacks x-rayed and names checked against the passenger list as we disembarked. I cannot believe our luck: rain and drizzle awaited our first excursion. We had no idea we had a tour guide on the ship but we followed her after asking if we could (no charge). Mary wasn’t keen at first. She asked how long the tour would be (approximately 1-1/2 hours). It was turned out to be the best idea as we wouldn’t have known to visit some of the hot spots.

We hadn’t planned any excursions (cheaper to plan direct) and hadn’t changed our minds once we’d boarded ship (more expensive there). I have no complaints about our impromptu walk through Juneau. More about that later.

Here are some examples of possibilities and costs on offer when booked on the ship:

The rain continued but the tour guide entranced her followers, hoods on and hoods off, umbrellas up and taken down.

Next on April 20th – North to Alaska: Rainy Juneau Tour

41 thoughts on “North to Alaska: Yay! Juneau Ahead”